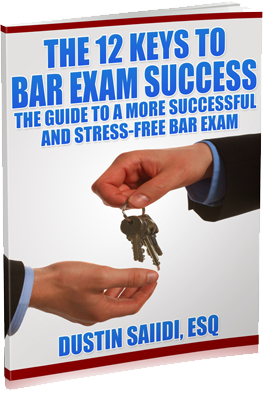 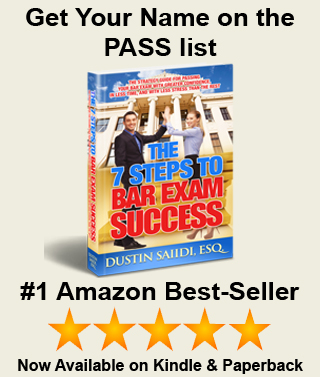 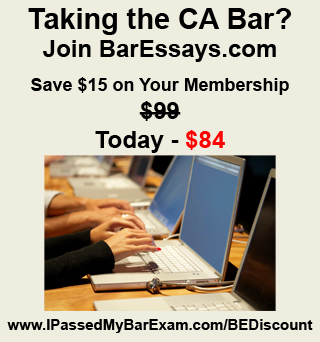 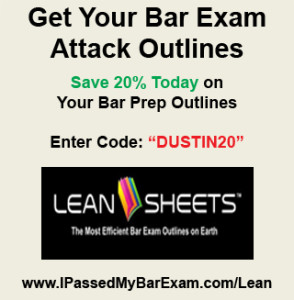 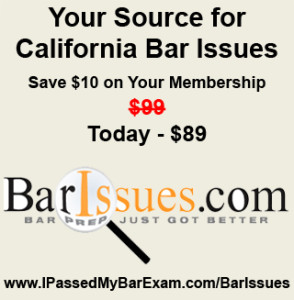 In this video, I give bar exam repeaters an idea of where to focus on for their next attempt at passing the bar exam.

Hey everyone! Dustin here from IPassedMyBarExam.com and author of the #1 Amazon bestseller The 7 Steps To Bar Exam Success. And a question from a repeater student that I was recently coaching and helping is this – if they did really good on one portion of the bar exam but failed the other portion, when they’re repeating the exam, should they focus on the portion that they didn’t do so well on and spend minimal time on the portion that they did do well on.

And my answer is this – it really kind of depends on the person but don’t neglect the area that you did do good in. You probably did well on it because of a reason. You probably put the time or the focus and you studied correctly in that area to help you get a higher score. If you stop putting in the time and the focus second time around, your scores may drop.

Generally speaking, yeah you do want to make sure you focus on the weak areas and really improve those weak areas. However, make sure you don’t neglect where you were in those other areas too. Check in every so often and just see. Let’s say you did good on the MBE, so check in, do some MBE questions and see where you’re at.

Make sure you’re still getting a good score, you’re still passing, and if that’s the case then yeah go ahead and focus more on the essays and the PTs and wherever your weak areas were. Generally speaking, it is a very good idea to focus on the weak areas because you want to try and pass each component of the bar exam. So if your essays are really bad, then focus. Find out what you did wrong, what you could do better and then start to do that as you prepare.

That’s my tip. That’s my advice to focus on those weak areas but again don’t neglect those areas that you did well on. Go out there and get it this week. Hit the like button below if you like this video. Also, head on over to IPassedMyBarExam.com/12Keys, get your 12 keys pdf guide to passing the bar exam. Until next time. I’ll see you in the next video. And always remember that your name, yes your name, appears on the pass list.

2 thoughts on “Bar Exam Repeaters: Where to Focus Your Prep on Your Next Try”